I’ve bumped into a couple of wireless Android control apps lately, one targeted at developers and one targeted at users. The two apps rely on both your Android device and the computer that will be wirelessly connected to it being on the same Wi-fi network, which is fair enough – you’ll be using this in a home or work environment.

adbWireless one is solely aimed at developers, and I was introduced to it by Jim McKeeth’s blog post on using it in conjunction with Oxygene for Java.

Once you enable the app with the big red button on the main screen you can have adb on your computer hook up to your device across the Wi-fi network, rather than via the more typical USB cable connection. This is done using the adb connect <IP_address> command, where the IP address has a port specification and is supplied by adbWireless after the button is pressed. 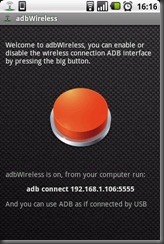 After making this wireless adb connection, you can work normally from the computer, deploying, running and debugging against the device. This works from any Android development tool, such as Eclipse or Oxygene for Java.

One rather large caveat, however, is that adbWireless only works on a rooted device. Rooting your device to gain root access is not risk-free (so on your own head be it!) and not always achievable.

In my case I recently tried to root my HTC Desire, but failed to do so (fortunately without bricking it). This was not due to a lack of information on how to proceed – indeed the Desire is (relatively) old now, being introduced in February 2010. However the avenue I took to root it (unrevoked – a very straightforward, automated, hands-free approach) had not been updated to cope with the most recent firmware update that was applied to the telephone not long ago. I’ll have to try again when unrevoked is next updated.

I very much like the idea of adbWireless, but currently I’m not in a position to try it out….

AirDroid is a general way of controlling your phone, using its services and accessing its data from a web page loaded on a machine on the same Wi-Fi network.

When you start AirDroid it shows you a simple IP-based local network URL that you can enter in a web browser on your computer, and a password to log in with.

Navigating to the URL in a desktop browser shows the web site pushed out by AirDroid, offering many options including:

The app itself also allows you to analyse/control various aspects of your device, including running tasks (and the obligatory task killer) memory usage:

I’ve already found this app very useful. On my old phone I had a couple of apps that I’d refused to update with newer versions as I had seen the newer versions crippled the (free) apps and removed functionality from what I had installed. Additionally there was an app that had since been removed from the Android Market. With AirDroid I simply exported the apps in question from the old phone web site, then used the web site of the new phone to install them – problem solved!

Here’s the AirDroid web page showing storage analysis on a new phone that has been in active use for a few days:

Note that AirDroid works on any Android device, regardless of whether it has been rooted or not.

Also note that AirDroid is currently in beta and so you do occasionally get little hiccups, but in general it is an impressive piece of work.

Four or five years ago, the software world was simple: if you were a commercial software developer, you were developing for Windows. But this has changed drastically with the advent of mobile platforms

Further to my previous post on common problems installing and/or launching Android apps, here’s a little titbit to add into the mix. In that previous post I mentioned: Sometimes a small