Yesterday, Apple annoucned its new M1 chip, and three new Macs that will use it, shipping next week. We all expected great things from the move to Apple Silicon, first teased at WWDC, but if the performance claims Apple made yesterday turn out to be true (a 3.5x speed boost in the MacBook Air, over the model from half a year earlier, woah!), the M1 chip — and its future siblings — will be an even bigger game changer than anticipated, not just for the Mac but the entire PC industry.

I talked a bit about our plans for Apple Silicon back in June, and I wanted to give you a quick update.

On the Elements side, we have been planning for ARM Macs since, literally, long before Apple announced the transition at WWDC. Our compiler toolchain was ready within days of the first SDK previews, and we have been testing against ARM test hardware, the DTK, since the day we got access to one.

I'm happy to say that Elements is more than ready to let you build great native Mac apps built for the M1 or Universal (for M1 and Intel), and for Big Sur — and has been for months.

This week's coming update also wounds off support support for running iOS, tvOS and watchOS Simulator apps in the Simulator as native ARM, as well as run and debug iOS apps natively without Simulator.

Fire already runs great on the Apple Silicon DTK, and of course works well and looks gorgeous on Big Sur, both Intel and ARM. Given that Fire was birthed on and runs super fast on the 'underpowered' 12" MacBook, I simply cannot wait to see how fast it will be on the new Macs with M1!

Last but certainly not least, Remoting SDK and Data Abstract for Cocoa are also ready for Apple Silicon and the M1. Given RO/DA have a long tradition of supporting arm64 for iOS already, this basically came for free, and "just worked". Whether you use them with Xcode or Elements — just enable the arm64 Architecture in your project, and you're set.

Personally, I'm very excited about Apple Silicon, and have been for years. And I'm especially looking forward to getting my hands on the newly announced MacBook Air with M1.

Let us know what your toughts on the matter are, and what your plans are to develop great new apps for it with Elements and RO/DA! 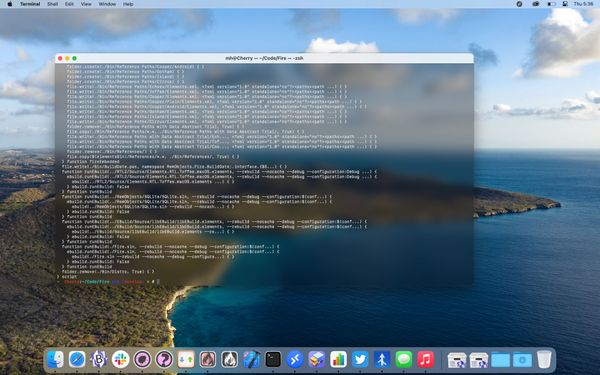 "Behind The Build" is a new blog series where I will try to give some background information on some of the highlights of the weekly change log. As you probably know, we ship

This second part of our series on DI will be a bit more technical. It will discuss new APIs provided by Remoting SDK, their performance and other technical details. The first question that